La Ingobernable CSO, is a key space when it comes to the common thinking in Madrid. The second IRI meeting, held in Madrid, occurred in parallel with the “Master” in Urban Commons and both sessions took place at La Ingobernable, which had a central role in designing and realizing the Master, developed along other common spaces as L’Asilo (Naples) or La Casa Invisible (Málaga), conceived as an action intervention for the legalization of the commons.

La Ingobernable is an occupied social centre in the heart of the city of Madrid facing constant threats of eviction, due the fact the city council doesn’t recognize it’s central function and value for everyday’s life in common for the inhabitants of Madrid..

La Ingobernable launched a support campaign based on the document that they are presenting to the city council with the purpose of opening a dialogue with the government of the mayor Manuela Carmena. IRI strongly believes on supporting this values and encourages to show your support and invites you to sign the letter.

MASTER in Urban Commons, the Ingobernable and various social centres in Madrid and across Spain will collectively discuss and re-define the vocabularies, practices and strategies of urban commoning starting by sharing the experience of I beni comuni emergenti developed by l’Asilo Ex Asilo Filangieri in Naples. END_OF_DOCUMENT_TOKEN_TO_BE_REPLACED 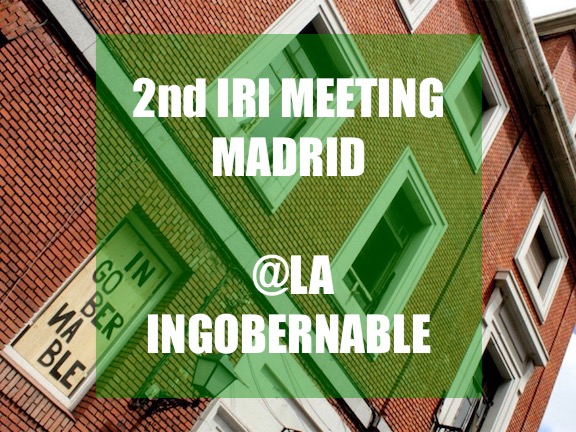 18:30 – 21:00 – L ‘Asilo Open Space. Researchers and activists from centri sociali and other initiatives in Naples will join to discuss possible collaborations with the Institute.

10:00 – 13:00  Further discussion and goodbyes at the centre Scugnizzo Liberato.